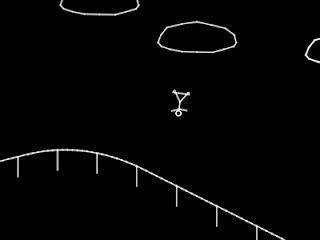 I've made a couple games for the Experimental Gameplay Project this month, the theme was Bare Minimum, and despite that I barely finished on time. Actually I spent about a day each on the games, which can be downloaded here: V-Sides Download
Update!
I realized I forgot to explain the controls, they are:
Rescue Helicopter:
Up/Down: Increase/decrease throttle
Left/Right: Rotate left/right
Button A(Space bar): Lower basket
Button B(S key): Raise basket
If the throttle is about 3/4 then you will hover, gentle taps of left and right are necessary to keep you balanced. Only one person can fit in the basket at a time.
Return to Skateboard Mountain:
Down: Duck
Left/Right: Lean left/right
Button A(Space bar): Jump (only if you're already ducking)
You can jump and flip if you lean and duck and then jump.
Using a gamepad is highly recommended.
The games are:
Rescue Helicopter, a helicopter sim inspired by Choplifter, where you try to rescue people with your helicopter. This game is HARD!
Return to Skateboard Mountain, inspired by Ski Stunt Simulator, skate down Skateboard Mountain doing radical jumps!
Both games use the No Quarter framework, which allowed me to prototype them very quickly. They feature old-school vector-based graphics, for all you old-school vector-based graphics fans. I have some videos that I'll try to throw together in the next couple days that show the progress of the prototypes. It won't be as cool as Petri's video for last months EGP but oh well.
Also thanks to all the people up in Toronto for showing me an awesome time, by some beer at The Beer Store for me, eh?
-Alex
Posted by Alex Austin at 11:33 PM

So, how is No Quarter coming along? Are you close to a release date? I really can't wait for this one :)

Fun games; Rescue Helicopter is too tough for my taste, but I really like Return to Skateboard Mountain, it sort of reminds me of ski stunt simulator. Anyway, good job on these, but when's the No Quarter beta gonna be sent out?

Awesome...
Include it in No Quarter as a secret

Sweet. Nice little contributions to the experimental scene. I liked the bucket mechanic, and the tilting in the skateboarding game adds a lot and goes to show how much you really need to know about physics in order to do a sport like that. XD

nice work! I'm going to blog this game, its awesome.

Thanks for your marvelous posting! I genuinely enjoyed reading it, you may be a great author.I will make certain to bookmark your blog and will come back in the future. I want to encourage that you continue your great posts, have a nice afternoon!
Hamburg hotels

The author has written an excellent article. You have made your point and there is not much to argue about. It is like the following universal truth that you can not argue with: No truth is universal, everything has its exception. Thanks for the info penis enlargement penis enlargement pills Vigrx Plus

Satchel understood that the great white players such as Joe DiMaggio for example, received treatment from others that cambridge satchel would help propel their star status and legendary accomplishments. He knew if he was going to ensure his own legacy, he would need to do that self promotion himself. In a way, it's as if Satchel Paige understood cambridge satchel company in this early era the importance of having a personal brand. He even contributed to discrepancies about his age in order to make his accomplishments more extraordinary. We hear that one of the greatest mysteries of the 30's and 40's was the true age of messi jersey!

www.diablo3bay.com They will spent numerous, much time within Blizzard online games whole world: which is where they've got his or her buddies, not to mention their team. World of Warcraft in lots of ways is actually its type D3 Gold, plus a planet that may not replaced by anyone apart from Blizzard.

Thank you for sharing this skateboarding online games pretty sure my son will love this and he will learn more from your post..:-)